Today our Crock Pot post comes from The Cheapskate Cook….any friend of the CHEAP is a friend of mine. Thanks Steph! 🙂

If I’ve learned one thing in my frugal cooking experience, it’s how smart old people are. Really.

I think of all the things our grandparents did that people have laughed at over the years – washing their freezer bags, refusing to get credit cards, using that old seventies sofa until its exposed springs were a tetanus hazard. Then I look at these new blogs popping up every day, and I can’t help but laugh all over again. We’re suddenly realizing that our grandparents were pretty smart. They might not have a huge Twitter following (let’s face it – most of them are pretty savvy members of Facebook now), but many of them have wise ideas about handling and saving money.

A few years ago, after pinching our pennies, my husband and I were able to visit his old relatives that still live in the hill village in Greece where Chris’ family came from. We stayed with them for two months. During that time, my theas (“aunts” – only they weren’t actually my aunts – more like distant cousins who treated us like their long lost favorite children), taught me how to make Greek food. Most dishes involved exorbitant amounts of olive oil and salt, but each one of them was simple, frugal, and made with whole, real food ingredients. (I also learned I could cut down on the oil and salt and still make awesome food.) 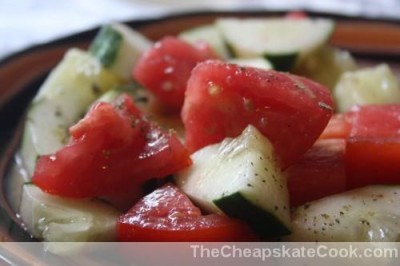 They were delicious. Turns out the past generations knew a thing or two about whole food cooking as well as money.

This recipe was inspired by my Greek thea who served us this dish fairly regularly. She used a pressure cooker and I use a slow cooker; she boiled the meat and I brown it. But the basic recipe is the same, and the result is a savory, tender roast that only requires a few frugal ingredients and absolutely no processed ones.

Making this dish not only reminds me of my husband’s – and now my – Greek heritage, it also reminds me that I have a lot to learn from those people who do crazy, wise things like wash freezer bags and refuse to get credit cards. 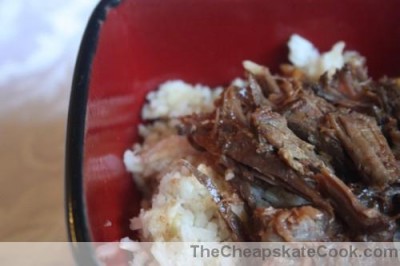 When Steph and her husband got married, they lived in a renovated shed and had a grocery budget that matched. As a passionate whole-foodie, Steph was determined to continue eating healthy, minimally-processed foods on their shoestring budget. So The Cheapskate Cook was born.